Eve took her pet store gift card and spent it all on presents for the pets. :) She’s so cute. She loves it there too. We had a really fun time shopping. The staff is so friendly and the girl helping us had hot pink hair. Eve will be working there some day!

Thanks for the gift card, Mema! We had a lot of fun with it.

This poor guy went to the vet today for a neutering. He is so silly and love car rides and loves the vet’s office. I wonder if that will change now! :)  The surgery went well, but the vet said he immediately started worrying at his sutures as he came out of anesthesia, so they coned him. I was expecting that. Poor puppy. It is a beautiful day and it’s Friday and I’m in the mood to post a few pictures. :) This was yesterday morning. I took the picture and sent it to my colleagues, saying “Sorry, I can’t work today. The cat has claimed my computer.” :)

We are all still in school, though the high school seems to have given up so starting next week Lex will have no more assignments, while Eve and I will continue plugging away for three more weeks.  :(

His birthday is Monday. The world was nice enough to give us all the day off.  We have plans to continue socially isolating at home.  There might also be a birthday world being built in Minecraft. I think Eve has been working on that the past few days.  We were joking (kind of) about having a birthday party in Minecraft. It would be fun if that worked out.

Today the Vermont National Guard did a fly-over with four fighter jets. It was part of an event honoring “essential employees” and first responders in the state.  The flew over all of the hospitals in the state, plus, I think, that big one right over the border. :)

We forgot until we heard a rumble in the sky, then we ran outside to see.  It was still a few minutes before their scheduled time, so we hung out outside for a little while, hoping that we hadn’t missed them. Apparently we were too late though. :( We did enjoy some time in the sunshine at least! I figured I should take a few pictures to prove that we do leave the house on occasion. :) The backyard neighbors have a lilac tree that is starting to hang over our lawn. We might help ourselves to lilacs later this summer! Eve tried to climb the tree and decided she is too big and/or the tree is too small. Waiting for the planes on a sunny day.

The karate dojo has been doing Zoom lessons (like everyone else in these quarantine times) and the also post challenges or special activities sometimes too.  This week they posted the SHOE-do-in challenge.  Eve saw it and said, “That’s easy!” Then proceeded to do it successfully on her second try!  She was super proud of herself! Not because she worked hard at it, but because she’s naturally flexible. :)

We sent it right off to the dojo for bragging rights. :)

Finally, I started with the cat so I’ll end with the dog. If I stay in one place for too long (like a few seconds), I ended up with a foot warmer. :)

Meet our new pup! Fresh in from the Bahamas. Winter will be fun for him. 😄 He is practically perfect in every way. He’s calm, he’s quiet, he’s small(er), and, most importantly, he LOVES Alan! 😄😄😄 Actually he loves everyone! 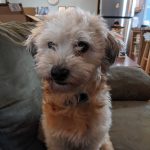 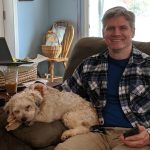 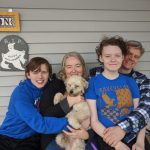 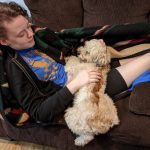 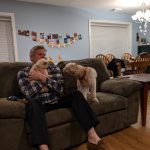 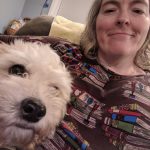 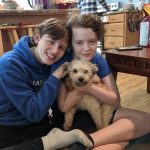 Unfortunately he has heartworms and tape worms, but we have him on meds and he’ll be healthy soon enough. He makes us laugh and smile and awww every day.