We started the day with a beautiful, sunny
morning. Alan is home and we all went outside to mow the lawn,
move car seats, and just hang out. I love vacation! Now the
kids are both sleeping and we have a lot of packing to do!! So,
I decided to post a few pictures here :) Great logic, huh?
Procrastination is my specialty. 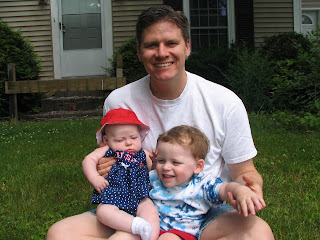 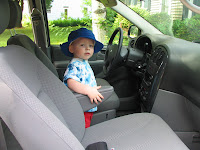 Also a few milestone updates… Though still not
ready for potty training, Lex has made a big step in the right
direction. Just in the past few days he has really become aware
of conditions in his diaper. Instead of fighting the diaper
changes, he now (usually) tells me has a poopy diaper and then
climbs up onto the changing table and waits for me to change
him. Today he even asked for Desitin , which he needed, and
after I put the Desitin and clean diaper on, he kept telling me
he had poop in his diaper. I imagine they feel similar —
squishy and not-quite-right. Anyway, TMI for most of you, I’m
sure, but a positive sign for me :) 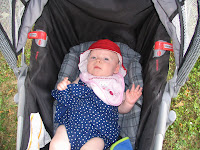 Eve, on the other hand, has started laughing and
grabbing things. She likes her bibs and the dress she is
wearing today. She also likes to hold my hand or arm when I’m
changing her. It’s so sweet! I read recently that by 3 months
babies are starting to sit up on their own. Not stably and
consistently, but starting to. I realized that I never really
tried sitting Eve up, so I gave it a shot and she promptly spit
up everywhere :) Oh well. She also doesn’t get long stretches
of tummy-time because that too makes her spit up. I think we
need to hold off working her too hard until she gets better
control of that esophagus! She is oh so sweet though. :)
[youtube=http://www.youtube.com/watch?v=NbHrFZmunIQ]