I wonder how many posts I’ve written over
the years about sleep. Not getting any, getting some, everyone
in the bed, no one in their beds, not enough sleep, too much
sleep (never!), etc. It seems to be an ever-prevalent thought
in my head and therefore topic for the blog :)

Anyway, naps seem to be shifting for everyone
around here. Well, not everyone, Alan and I are still holding
steady at none! As Lex slowly gives up his naps, Eve is slowly
shifting to just one nap a day. Luckily it’s usually a good
long one! For awhile Lex was napping every other day or so and
seemed to be doing ok with that, but lately he just won’t nap.
Even when he sits in his bed (dim room, fan on, etc.) he reads
books quietly, but doesn’t sleep. Although this makes for
earlier bedtimes, more often than not they are no fun because
he’s too overtired.

Yesterday we had an
awful experience which inspired me to change up our whole
routine. Maybe awful is too strong a word, but it certainly
wasn’t fun. I’ve been exercising in the mornings then
showering, which means the kids are entertaining themselves for
a good portion of the morning and then Lex is watching tv for
30-45min (ok, sometimes up to an hour!) and then it’s lunch and
rest time. This works well from a WW perspective (I hit my
pregnancy weight last week!), but not so well from a kid
perspective. In the afternoons I try to get him outside, but he
usually just wants to play indoors and ends up weirdly
wired/tired by 7pm. Yesterday I took them to a farm that has a
pumpkin patch, corn maze, apple picking, berry picking and
more. I thought it would be fun and a great way for him to burn
some energy. Instead he was out of control, not listening to me
at all, and almost got hit by a minivan as he ran away from me
in the parking lot. Thankfully the minivan driver was paying
attention and saw him dart towards her! I can only imagine what
she was mumbling about me as she drove away. Anyway, I was
scared! 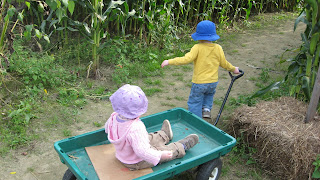 Eve
immediately found the wagons and wanted a ride. Lex started off
strong as we headed into the corn maze, but quickly decided he
wanted to ride too. We went through most of the corn maze with
me pulling them both on the wagon. So much for them burning off
energy! 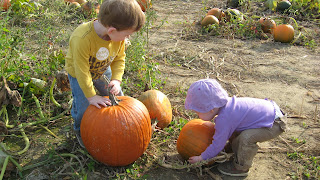 I told
them they could each get one pumpkin, but it had to be one they
could carry… 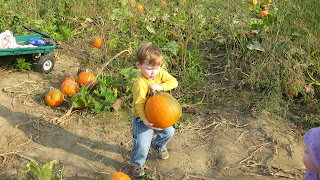 He
almost carried this one! They both ended up with ones much
smaller :)

Alan and I
chatted last night and I think I’m going to go back to our old,
pre-WW schedule of outings in the morning. I think getting him
out in the morning when he’s more alert and happy will help him
be calmer for the rest of the day and may even help prolong
naps for a bit longer. I’m not sure when I’m going to fit
exercise in with this new/old plan, but at the moment I think
getting him back on track is more important. We had a great
time playing with Michelle this morning (the kids played
together with no fighting!), then went to WW, and now he is
having quiet time in his room. Still not sleeping, but
hopefully getting some rest.

Kids are
such puzzles! Just when it seems like one thing is working,
they decide to mix it up a bit! I bet you’ll find lots of posts
along those lines in this blog too ;)

One thought on “Shifting sleep and other stuff”