On Saturday we had to cancel a trip to
Chuck E. Cheese with Jim & Julie. We were all really
sad. We told Lex that we’d go to the Montshire instead, but
then he ended up taking a good nap and waking up about 5
minutes before the museum closed. More sadness. Instead we went
to Panera Bread for dinner (thanks Uncle B!!!) and everyone was
happy. It’s been forever since we’ve been there and the kids
love it. On Sunday we were the first ones at the Montshire
:) 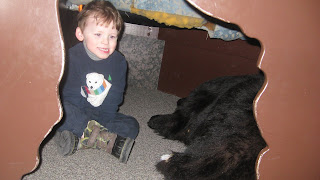 Lex
checks on the bear, making sure he’s still there and still
napping. 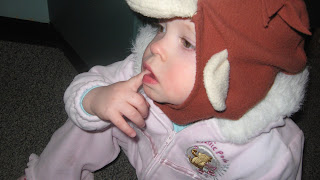 Monday started with
a message from Rosy asking if she could come visit. Yay! Then
we had the good fortune to tag along with Alan on a server fix
trip to MA. Good fortune for me and the kids, not so much for
him. We dropped him at his data center and went to visit Julie
and baby Molly. It was great. The kids are so sweet and
innocent and Lex was as equally excitied to go to their house
as he was to go to C.E.C. I think the excitement was to see
them, not so much the location. Anyway, we had a fun visit,
introduced Molly to “veggie sticks” (we just discovered them
the other day), and got to play with lots of new toys. 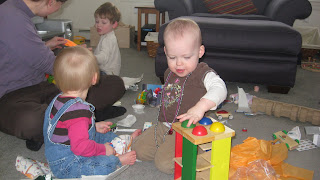 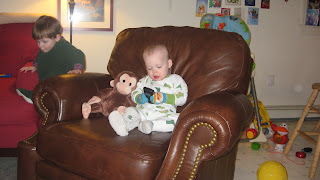 We were
there pretty late and Eve was very ready for bed. When I
changed her in to PJs she wanted to put “winnie pooh socks on
hands,” and then make a few phone calls :)

We spent this morning cleaning the house (it
was a disaster!!) and then Rosy came to visit with her new
puppy! What an exciting week! Lex likes him a lot, and Eve
likes him when he’s in the other room :) He’s only 7 weeks old
and a little nippy. We taught her to say “no bite” to him, but
she uses here little baby voice and tends to break out into
tears, so I don’t think Bone sees her as very authorative :)
But I think they will warm up to each other pretty
quickly! 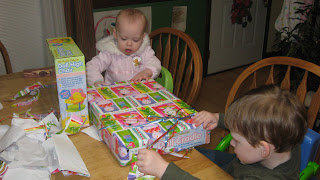 Now, some movies for you. First one is Eve
singing the alphabet and the second one is of Lex reading a
letter from Mema.

One thought on “A busy few days”