I put up three new videos on YouTube
today. You can see them down the right side there.
[youtube=http://www.youtube.com/watch?v=tByGfRO84oQ]

We did more yard work today and Alan
decided to take a shower this evening, so we decided to throw
the kids in the shower with him (one at a time, of course),
instead of baths. Lex loves the shower! Eve was pretty
fascinated too. We started showering Lex around 4wks because it
was so much easier than the baby bath and he liked it much
better. We may take the same route with Eve too, we’ll see. Lex
is actually sick again today. He woke up from his nap with a
fever of 103. I don’t know what’s going on with him. It seems
to be ever Sunday lately. If he were in school I’d get
suspicious :) We’ll see how he feels tomorrow and may end up at
the doctor. Or he may wake up just fine, who knows.

Here is a little movie of the two of them. I
think Lex likes his little sister. I think she likes sleeping
on the floor :)
[youtube=http://www.youtube.com/watch?v=ZCsAqtiqIQk] 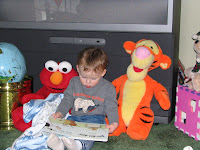 I posted a few more movies to YouTube (see down
the side of the page). In the first one Lex is reading Curious
George (not our favorite book, I think Alan actually “lost” it
today) and seems to think it’s written by Dr. Seuss. In the
next one he is talking to himself in the mirror for a second
(I’m always a little too slow with the camera) and then tosses
a ball down the hall. The third was from today (the other two
were earlier this week) and he’s trying to put on his new
boots. Doesn’t succeed, but he’s trying. At the end he comes
over to point out the gray camera and pull on the cap. These
are probably boring videos, but oh well. :)

Lex made a huge mess at dinner tonight
(dumped yogurt all over himself) so we had to strip him down.
He had a blast being nearly naked for a few minutes. He’s
saying “babalooo” when he’s patting his belly and
running.
[youtube=http://www.youtube.com/watch?v=rWPOh4U00lc]
PS. I think I like YouTube! Hopefully it’s
working for all (or at least most) of you
:) 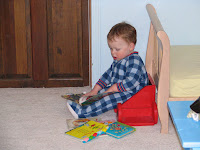 Lex likes to sit on a little train bookshelf
that Aunt Betty made for him and read stories. Here is a
picture and a short movie from tonight. I have to figure out
how to adjust my camera settings though, because the movies are
all in the highest quality and usually too big to upload. I
have a better one of him reading a whole book (just a minute
long), but it’s too big to post :/ Time to learn something new
about my camera. :)
[youtube=http://www.youtube.com/watch?v=RZGUqQw5vvg] 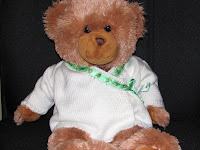 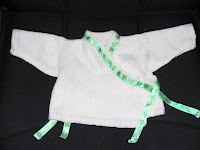 Another sweater for baby. I’m no Martha Stewart,
but it’s not too shabby. I actually started it for Lex but only
got about half way done before he was born. Then I stopped
knitting for quite some time :) So I figured I’d finish it for
the next little one.

Since I have the
sewing machine out for its quad-annual (what’s the word for
every 4 years??) usage, I’m going all out and cleaning up my
sewing pile. It’s more of a mental pile really, since there is
stuff all over the house that I keep meaning to fix “next time
I have the sewing machine out.” Soo… I guess it’s now or
2011! 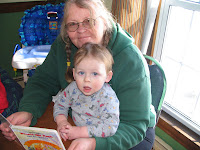 On a Lex note, I went shopping with the family
this past weekend and bought (well, Mema bought…thanks!!)
some 2T (24mo) jeans for Lex and some Play-Doh. Turns out he’s
not really ready for either! His blue jeans are starting to get
too short on him so I thought it was time for 2T, but the new
ones are huge! I checked the tag on his too-short pants and
they are 12mo. No wonder he’s outgrowing them! So he’s now
wearing the 2T and I’ve become one of those “he’ll grow into
them” moms :) I got out the Play-Doh yesterday and he had more
fun stacking the cups than actually playing with the Play-Doh.
I was showing him how to roll it and squish it and he kept
trying to put it in his mouth. He does it very subtly :) After
a few times telling him not to I said “Ok, go ahead and try it,
but it tastes yucky.” He tried it, thought for a minute, tried
some more, then broke off an even bigger piece and stuck it in
his mouth. Hehehe… guess he likes it. I had to stop him at
that point. I also got a laugh that the container says
“Notice to Parents: Contains
Wheat.” I guess enough kids eat it
that they felt the need to post allergen alerts :) I got the
Play-Doh out again today and he got some mild enjoyment out of
squashing it in his hand, but still preferred to stack the
cups.

Lastly, here is a little video for
you of Lex saying the alphabet. He’s pretty silly and drooly,
but you can hear most of the letters.
[youtube=http://www.youtube.com/watch?v=8dyJb2x5L5U]
Boy,
does anyone actually read these long rambling posts of mine??
If so, wow! ;)

A few movies from when we were decorating
the Christmas tree this weekend. Alan filmed them and Lex was
the star, so I’m doing my part by publishing them :)

Laundry
Lex is
very helpful (mostly) with the laundry.

Toddler Fashion Show – Part
I
This was back at the apartment. Lex
is very helpful at mealtimes. He climbs into his highchair and
puts on his bib.

Toddler Fashion Show
– Part II
Just the other day at the new
house. And you all thought his boots were
big! We had to reinact this a bit because we didn’t have the
camera the first time around. Who knew he could actually walk
in these things!

Hopefully these work well for you. We also have a cute one
of him sitting on the potty, but I’m not gonna post that. He’s
naked and it’s definitely an invasion of privacy :)